Sodexo has published its second Public Service Pledge, a strategic and ethical set of commitments to its customers, employees and communities. 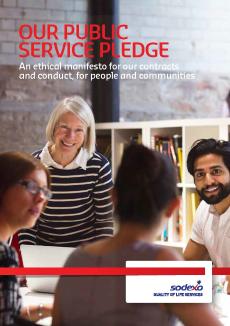 The Sodexo team was recognised at the annual healthyliving awards hosted by NHS Health Scotland on 21 March at the Merchants House of Glasgow.

The plus award requires a greater level of dedication and effort in order to meet the higher-level criteria. This includes ensuring that 70% of all food meets the award guidelines, with at least 50% of menu choices meeting the award guidelines in each section of the menu including confectionary, bakery and crisps, and avoiding the promotion of non-healthyliving choices and keeping sugary drinks to a minimum.

Initially, Sodexo achieved the plus award across the staff restaurants before focusing on in-room hospitality menus and then seven coffee shops.

Sodexo at the Scottish Government has been working with the healthyliving award since launch in 2006 and has over 70 sites across Scotland accredited.

Joe Aitken, Sodexo Government Services account manager, said: “We are extremely proud to be the first group contract in Scotland to achieve the healthyliving plus award across every service we deliver within the Scottish Government.

“The healthyliving award is vital to the work we do, and in line with our corporate responsibility strategy Better Tomorrow 2025 we understand the importance and benefits of healthier eating with regards to overall health of our customers and staff.

“When it came to in-room hospitality, we worked to create an exciting and appetising menu with a focus on Scottish produce that met the healthyliving plus award criteria. The coffee shops were the most challenging model of the business to change, but we worked hard with healthyliving to communicate the benefits of healthier options to customers.”

Anne Lee, organisational lead for the healthyliving award said: “When the healthyliving award was launched back in 2006 contract caterers were amongst the enthusiastic early adopters. Sodexo have demonstrated their commitment through continuous improvement. Clearly showing that providing healthier options is both good for business as well as good for the customer. Congratulations to all the team on their achievement.”

For all media enquiries during office hours, please contact the press office on 020 7404 0110 or email press.office@sodexo.com.