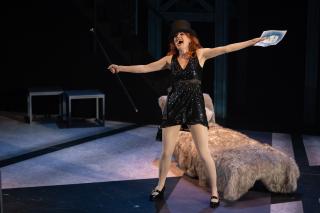 Last month HMP Bronzefield opened it’s doors to members of the public to welcome them for a West End-style theatre production of Sweet Charity.  Earlier this year Pimlico Opera approached the prison to work with us and our residents to put on a theatre production. Pimlico Opera has been working with prisons since 1987 to change prisons, prisoners and public perception.

The residents of HMP Bronzefield had the chance to be involved in all aspects of theatre, from acting on stage to vital backstage roles including hair and make-up. The cast was made up primarily by residents, with the lead role of Charity Hope Valentine performed by Laura Pitt-Pulford (Olivier Award Best Actress in a Musical nomination) and the male roles also played by professional actors. The prison sports hall was transformed into a theatre by a professional set designer with a 12 piece orchestra set above the stage.

One of the women involved said: “this is the single most memorable experience of my life. it has been a platform and an opportunity for me to explore something I’ve always wanted to do”

The prison continues to receive letters of thanks and support from members of the audience who came to see the production, one letter read: “…The whole evening was one which left us feeling elated, full of hope and optimism. and sheer wonder that you could get such a fantastic  performance together in such a short space of time…”

Ian Whiteside, Director HMP Bronzefield said: “The partnership with Pimlico Opera cannot be underestimated. It is the single most positive project within a prison I have ever been involved with and I wholeheartedly look forward to working with them again!”

The project has been such a success we will be pleased to welcome Pimlico Opera back in the future.